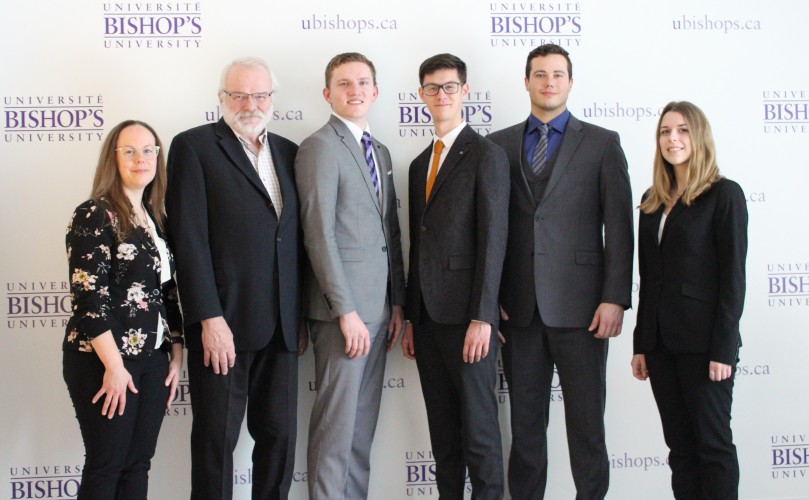 Charlene Marion (Coach)
Charlene is originally from a small town in Eastern Quebec. She came to Bishop’s to study Human Resources many years ago, and was part of the university’s championship-winning 2006 NIBS team in Oslo. Charlene is passionate about experiential learning and is currently completing her Master’s degree in the area. She also has a background in change management. In her spare time, she coaches basketball, bakes cupcakes, and spends time with her little girl.

Bill Robson (Coach)
A NIBS coach since the beginning of time, Bill has also been a strategy and human resources professor at Bishop’s for over 30 years. Although retired, he still teaches courses for fun in Change Management, Innovation, Business Policy, and Case Preparation. In his spare time, Bill oversees operations for the men’s rugby team at Bishop’s (a team he coached for decades), and enjoys storytelling and cooking up a storm.

Noah Jepson
Noah spent most of his childhood in Colorado. At Bishop’s, he found a passion for finance and economics, where he is also part of the prestigious SEED Portfolio (a student-run portfolio that manages over $600,000). Noah has taken several leadership roles on campus, most recently as president of the Commerce Society. He has also participated in numerous finance case competitions (Battle on Bay, Jeux du Commerce Central) and the Global Business Case Competition in Seattle. Noah spent last summer in an internship at Fiera Capital in Montreal and plans to continue his career in investment banking. Noah enjoys swimming, puppies, speaking with a French accent, and spending too much time on social media (follow him on Instagram @therealjepson).

Maxim Jacques
Maxim was born in a small town in southeastern Quebec. He is a fourth year BBA student majoring in Global Management and Leadership, with an Information Technology profile. During the Winter 2019 semester, Maxim completed an exchange at the University of Essex in the UK where he discovered a passion for cultural experiences and environmental sustainability. This led him to complete a two-week program in Water Resource Management & Sustainable Development in Peru. Maxim competed in Jeux du Commerce (Strategy) and the Family Enterprise Case Competition this year, while also holding an executive position in the Commerce Society. He has a passion for music and outdoors. Currently working as a Business Development Analyst for a manufacturing company in Quebec, he plans to pursue a master’s degree to gain knowledge for his career in business sustainability.

Cecil Belanger
A fourth-year Marketing and Entrepreneurship student, Cecil grew up as one of nine children on a farm in Langley, British Columbia, just outside Vancouver. Football has always been a major part of his life; he played for the Bishop’s Gaiters for three years and has recently transitioned to coaching. Cecil serves as an executive on the Commerce Society as well as manager of the on-campus bar. He is a veteran of the Jeux du Commerce and Maple League case competitions. Cecil has aspirations of starting his own business upon graduation in June. When not working or coaching, he can be found on stage belting out his favourite country songs.

Kelly Poirier
Born and raised in Quebec, Kelly is a fourth-year accounting student.  She currently serves as an executive for the Bishop’s accounting society, and recently completed an auditing internship at Deloitte. Kelly has competed in several different case competitions, including the Jeux du Commerce (Accounting) and the Achieve Accounting Case Competition, where she reached the podium. Outside school and work, Kelly loves travelling and hiking. She plans to pursue a career as a Chartered Professional Accountant.