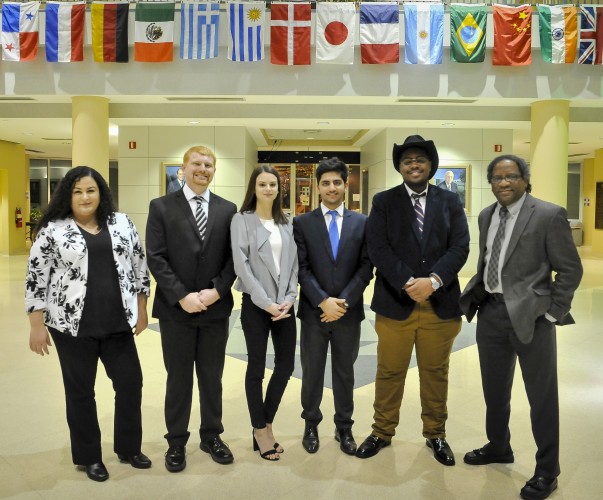 Sarah holds an MBA from Southeast Missouri State University and a Master of Arts in international business and economics from the Schmalkalden University of Applied Sciences, Germany. Her attention turned to a consulting career shortly after she represented Southeast Missouri State in the 2018 NIBS International Business Case Competition in Guatemala City. The skills she learned as a competitor inspired her to return to SEMO to work with Dr. Willie Redmond in training the school’s case competition teams. This is Sarah’s second year as a NIBS coach, after a successful experience in Prince Edward Island in 2019.

Zachary is a senior from Albers, Illinois. He is currently pursuing a double-major in accounting and finance, and works part-time as a tax preparer and a payroll staff member. In addition to his involvement in case competitions, he has served as treasurer of the Southeast Missouri Chapter of the Delta Chi Fraternity and vice-president of Judicial Affairs for the Interfraternity Council. After graduating in May, he will begin a position as an audit staff member for Brown Smith Wallace LLC in St. Louis.

Madison is a senior from Farmington, Missouri.  A double-major in hospitality management and international business, she is currently president of Southeast’s Collegiate DECA chapter and a member of the Jane Stephens Honor Program. Madison also works full-time as the bistro manager at the Courtyard by Marriott in downtown Cape Girardeau, and plans to complete a study abroad program in the summer of 2020, where she will travel to France and Germany.  After graduation, she plans to move to Colorado to work for one of America’s best microbreweries.

Bhavya is a junior from New Delhi, India, studying cybersecurity and economics.  He is passionate about politics, economics, and IT and looks for opportunities to learn on a daily basis. Bhavya is currently doing research on mobile app security, and has been active in a range of extra-curricular activities at Southeast Missouri State University. In his free time, he enjoys rock climbing and hiking. After graduation, he plans to work in IT consulting and eventually start his own IT consulting firm.

Dominick is a senior from St. Louis, with a major in corporate communications and a double minor in integrated marketing communication and entrepreneurship. He is currently the president of the Delta Zeta chapter of Tau Kappa Epsilon and is involved with the National Organization for the Reform of Marijuana Laws (NORML). Dominick plans to pursue a master’s degree and doctorate in public affairs, and looks forward to a career in manufacturing and distribution in the cannabis industry.

Dr. Willie Redmond (Coach)
Willie earned both an MBA and a PhD in Economics from the University of South Carolina. He has been with Southeast Missouri State University for 21 years, where he currently serves as Director of International Business Programs and a Professor of Economics. Active with International Business study abroad programs, Willie has led over 30 student study abroad tours.  He has also taught international business and economics courses in Finland, Germany, the Netherlands and Russia. At Southeast Missouri State, he teaches both the graduate and undergraduate capstone courses in strategic management.